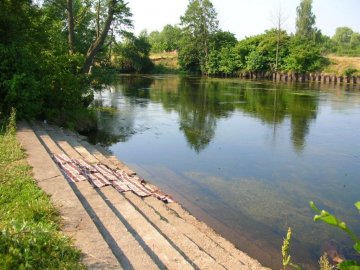 Kayaking trips down the Brda river. Brda, the longest river in the Tuchola Forest, is 239 km long. It starts in the Smołowe lake in the Bytów lake district. Along the entire Brda route there are numerous campsites and riverside hostels. The kayaking trip down the Brda river is recommended for those who appreciate the diversity of the nature.

The Brda River has a diverse course. In the upper sections Brda winds among fields and meadows. Due to frequent shallows kayakers are forced to carry their boats over. In the forests, the trees fallen down by beavers form obstacles. The river also flows through picturesque lakes. In the upper section, the route goes via Charzykowskie, Krasińskie and Witoczno lakes. Having flown through the five subsequent lakes, the river goes south via a narrow valley surrounded by mixed forests, and flows into the Szczytno lake. In its middle section, Brda flows through subsequent ribbon lakes of the Charzykowska lowland and in the Tuchola Forest. In this section, Zalew Koronowski, an artificial lake created by building a dam on Brda, is found highly ravishing.

The closer to Bydgoszcz, the easier the route gets. Brda flows slowly and the surrounding area is delightful. 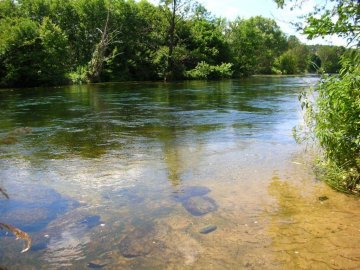 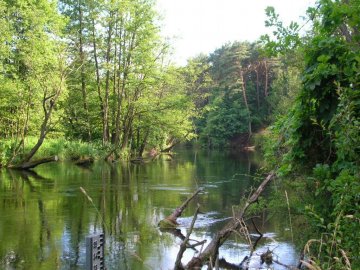 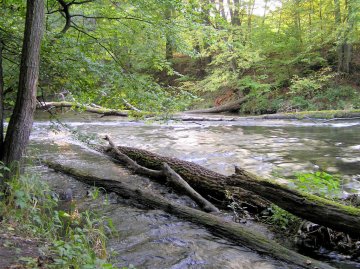 Obstacles on the route:

Grade of the Brda river:

Kayak trips down the Brda river are managed by our centre in Huta Kalna by Lubiki.

The most interesting tourist attractions on the Brda route

Lake Witoczno (kash. Jezoro Wëtoczno) is a ribbon lake located in the Charzykowska Lowland in the Tuchola Forest (Chojnice District, Pomorskie Province) 120 m above sea level. A total area of the lake amounts to 101 ha. The average depth of the lake is 6.8 m and the maximum one is 10 m.

Lake Małołąckie is located in the Charzykowska Lowland in the Pomorskie Province. In the north it joins the Lake Płęsno. A total area of the lake amounts to 37 ha. It’s one of the most beautiful lakes in the Pomerania region.

Lake Łąckie is a ribbon lake located in the Charzykowska Lowland in the centre of the Tuchola Forest (Chojnice District, Pomorskie Province). The watertable of Lake Łącie is 119 m above sea level. A total area of the lake amounts to 127 ha. The average depth is 12 m and the maximum one is 19 m.

A name of this plane derives from the Charzykowy village, located by the Lake Charzykowskie. It has the area of 2,405 km2 and is built mainly from river and glacial sands. It is located in the Pomorskie Province, in the upper section of the kayaking route down the Brda river.

Nature Reserve Przytoń was created in 1984. It is the youngest and, at the same time, very often visited reserve in the Niedźwiady Forest District. It is located in the Pomorskie Province, Człuchów District, Przechlewo Commune. From the east it is limited by the Brda river. This border section is the most difficult one on the route due to numerous fallen trees.

Lake Jezioro Dybrzyk (kash. Jezoro Debrzk) is beautifully located in the Charzykowska Plain. It’s a flow-through type of a lake. To be more precise, it’s located in the very centre of the Tuchola Forest (Chojnice District, Pomorskie Province).

Lake Kosobudno is a ribbon lake located in the Charzykowska Plain. To be more precise, it’s located in the Tuchola Forest (Chojnice District, Pomorskie Province). The lake is joined with Dybrzyk Lake by the ribbon of Brda, and then with Lake Trzemeszno by a small stream.

The Tuchola Forest is a beautiful area with breathtaking landscapes. There are numerous streams, lakes and ravishing forests. The area of the forest began to shape over 10,000 years ago. Two rivers, Wda and Brda, flow through the Tuchola Forest. Both the first one and the latter carved beautiful valleys in the ground.

Lake Charzykowskie is a ribbon lake located in the Pomorskie Province, Chojnice District, Chojnice Commune. In summer, a lot of events take place by the lake: a festival of chanteys, boat races and many other events related to water and sailing.

The dam in Mylof is an artificial reservoir important for both energy supply and tourism. It was built on the Brda river in the Tuchola Forest (Pomorskie Province, Chojnice District, Czersk Commune, village Zapora).

Lake Tryszczyn is located 2 km away from Kruszwica. It is governed by the Polish Angling Association. A total area of the lake amounts to 30 ha. In summer, it forms two smaller lakes which become a one uniform lake in autumn.

The Great Brda Canal is an artificial canal built by the Prussians in the 19th century. It is the largest aqueduct in Poland and is well maintained –– there are 30 km of canals here that drain water to the meadows of Czersk and then to hundreds of ditches.

The water grade in Smukała is a hydrotechnical construction aimed at damming up the Brda River to produce electricity in a hydroelectric power plant. The dam is located in Bydgoszcz itself, more precisely, in the north-west part of it –– in the Smukała estate. 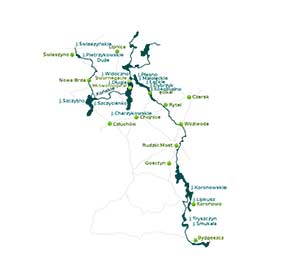 Questions? Write to us paddeln@as-tour.de