Apart from Brda, Wda is one of the longest rivers in Bory Tucholskie and, at the same time, one of the most important waterway in the Pomerania region. Due to its dark brown colour it used to be called Czarna Woda (the Black Water). Wda starts in the Lake Krążno, flows through the lakes of the Charzykowska Lowland, Tuchola Forest and debouches into Vistula in Świecie. It’s 198 km long and its basin amounts to 2,325 km2. The Wda route is pretty easy and as the current is fast paddling is not tiring. Wda has a nature of a lowland river. However, its variability (from the mountain stream to a wide slowly flowing river), the picturesque bends, often high and sometimes precipitous banks with plenty of trees as well as beautiful ravines, make it an interesting canoe trail.

We recommend the attractive section from Lipusz to Tleń for a trip (approx. 140 km, 7–10 days).

Detailed Description of the Wda Route 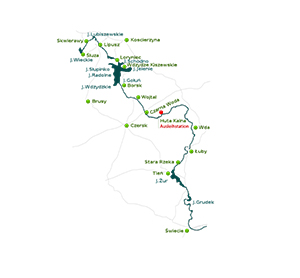 
Questions? Write to us paddeln@as-tour.de